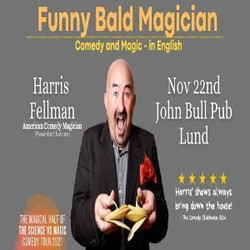 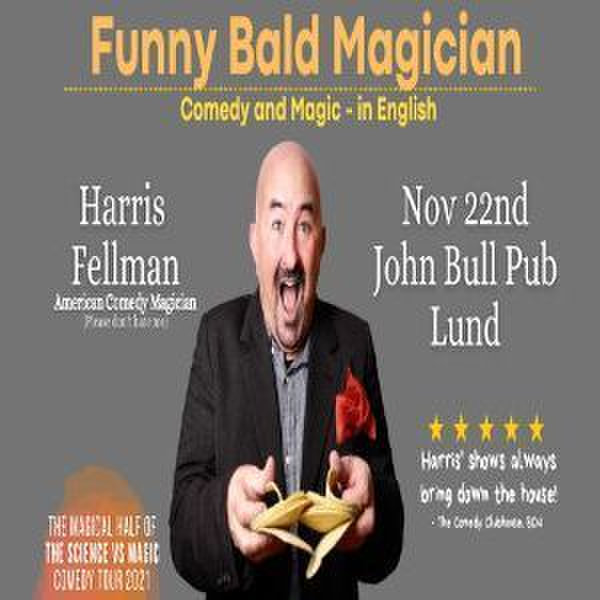 An Offbeat Comedy and Magic Show in English
(Doors Open at 6:30 PM on Monday, November 22nd)

This evening promises to be filled with laughs, wonder, and just a ton of fun!
American Comedy Magician Harris Fellman is bringing his offbeat comedy magic show to the John Bull Pub in Lund!

"An evening filled with laughs, wonder, and just a ton of fun!" - Barcelona Metropolitan

*VIP Includes: Best seats, a "magical" cocktail, and best chance to be part of show!

The show will be held entirely in English and will be held indoors and follow current local covid guidelines. Therefore, we are only able to have a limited number of tickets. Please reserve a seat in advance.

(Don't let the "English" scare you away. Magic transcends language because it's so visual - so, even if you're English is as bad as Harris' Spanish, you'll still have a great time!)

If that's not enough, you'll also see two mini-magic-shows from two other magicians, enjoy comedy from an award winning comedian , and if you get there early enough... you may get to experience a little magic right there at your table.
What the heck are you waiting for??

Get your ticket now for a hilarious, amazing, and mind boggling comedy magic show. If you like magic even a little bit, you're gonna absolutely love this show.

Harris' shows always bring down the house!! He is a great performer. 10 out of 10 and would def recommend!! - The Comedy Clubhouse